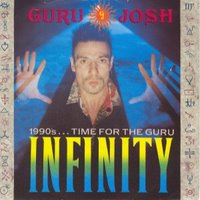 Last night's Going Down Swinging launch, held at Yelza in Fitzroy, was great fun. So much fun in fact that I'm only now on the verge of consciousness, my detox plans having been shredded, thrown out and then reassembled by the mysterious power of Guru Josh, whose track "Infinity" (pictured, left) is only slightly overshadowed by its b-side, the "Spacey Saxophone Mix". Words cannot begin to express the effect that this song, this man, this ouvre have had on me over the past fifteen years. Suffice it to say, the guy is untold. Also untold and slightly bulk ace, the Singapore-based webzine Softblow features one new poem ("Back To the Tourist III") and two of my imaginary cities, namely "Coni" and "Cubi". Read them at Softblow today! But if there was an award for bulk ace, it'd surely have to go to outgoing GDS editor and owner of her own rollerskates, alicia sometimes. Last night, I believe, marked her sixteen thousandth public appearance, and for that reason alone, I salute her. Bulk ace and fully untold!

Anonymous said…
Sixteenth thousandth? Got nothing on your 142 blogs, 243 mentions of your name in Cleo Magazine, the 767 times your name has been muttered by certain poetesses, the 34 times Sean M Whelan has engraved your last name on his ass and the 3244 links you have to you on everyone elses' sites.