August 30, 2005
she emerges from the bobble- cordoned bathing area with her pigtails wet & sticking out like unicorn horns from the back of her head - instantly she's a girl again the shining happy memory of herself as a strong swimmer dancer & singer all at once like a sea monkey queen reacting with water swirled & sequined in the jar for all to see - i've been reading too much murakami not to understand what does drive the mind growing older what cues the eye interprets as "summer holiday": such tropes as chipped nail polish tan lines of a different bikini beneath the current pair we stretched out legs on a gaudy beach towel airport novel open at a random page & left there like the roof of a swiss house on the rocks ... sometimes i forget that i can't speak japanese that this book is just a translation irritating in its americanisms like this endless parade of paris hilton stunt doubles along the beach whose vacuous stares thankfully are hidden from view by their designer fly or wasp sunglasses they couldn't ever hold a candle to this girl in pigtails emerging like reality TV from the water

Anonymous said…
i really love this one davey, it made me smile even though Ive just had a bad boring day keywording endless Lindsay lohan and Paris Hilton pictures!
12/05/2005 04:49:00 pm 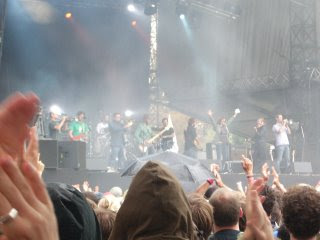 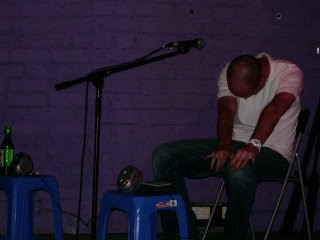 My re-baptism of fire on the Melbourne spoken word circuit last night at Babble provided me with some food for thought about how to get the most out of performance poetry. As I've not really performed as such for over six months, I of course went into the gig with grand plans and unpredictable outcomes. A small but generous crowd witnessed me limping through some old poems and some new pieces from my time overseas. First up was a risky gambit: a reading of my poem "There's A Wild Jack Russell In the Moon" featuring a piano soundtrack I recorded years ago, with me miming playing the piano and trying to remember the words to the poem. It was probably a bit long for an opening piece but it felt good to challenge myself to improvise the poem, and it got a few laughs. Next was "the Sprawl", my poem for Bruce Springsteen, and I was happy with my ability to remember the words (it's quite long). Next, another risky move, a new poem set to the tune of an Eny…
Read more

My chapbook Abendland (pictured left, details) has been reviewed by Philly poet Adam Fieled on his excellent blog. Check out the review here. As far as I can tell, this is the first time my work has ever been reviewed, anywhere. I only have a couple of copies of the book left, but I hope to make an announcement soon as to a possible re-release, along the lines of Pavement's Slanted and Enchanted. For those who don't have a clue what I'm talking about, Pavement's debut full length album circulated unofficially as a cassette tape in the early 1990s, with the consequence that it was well known "underground" before being released, erm, "overground". So, if you'd like to possess a copy of the original chapbook, and would like to be able to tell your grandkids that you got in there first, before the Abendland project went mainstream, contact me via email. Like, today. In other spellbinding news, sure to get Stung seething, I've finally bitten the…
Read more