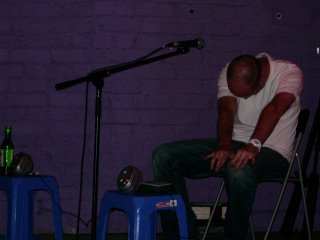 My re-baptism of fire on the Melbourne spoken word circuit last night at Babble provided me with some food for thought about how to get the most out of performance poetry. As I've not really performed as such for over six months, I of course went into the gig with grand plans and unpredictable outcomes. A small but generous crowd witnessed me limping through some old poems and some new pieces from my time overseas. First up was a risky gambit: a reading of my poem "There's A Wild Jack Russell In the Moon" featuring a piano soundtrack I recorded years ago, with me miming playing the piano and trying to remember the words to the poem. It was probably a bit long for an opening piece but it felt good to challenge myself to improvise the poem, and it got a few laughs. Next was "the Sprawl", my poem for Bruce Springsteen, and I was happy with my ability to remember the words (it's quite long). Next, another risky move, a new poem set to the tune of an Enya song, which started out funny but got sadder as it went on. Weird. Next, I read my poem "The Boys Who", using cards to recite each line ("the boy who was a nut ..." and so on). 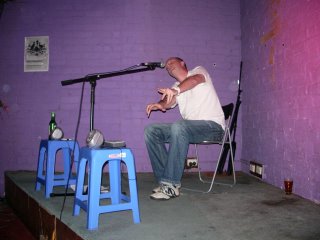 After that, I felt that my energy levels were fading a bit. It's hard to keep them up sometimes but I guess this is something any performer would know more about than me. I read "Pigtails", then a couple of poems from Korea: "Makkolli Moon" and "Snow Grocer".Part of the reason for the change of pace was the fact that these were newer poems and, being less prepared that I perhaps could have been, I was forced to read these poems from the page. But in another way, I don't really see anything wrong with reading poems from the page, as long as you're mixing it up ... anyway! I ended with a reading of "Mokochukcha", featuring a guest appearance from a bottle of soju I'd bought from the Korean grocer in Brunswick Street. I took a swig from the bottle every time I said the word "mokochukcha" (Korean for 'drink and die') - as this word occurs nine times in the poem, I was fairly tipsy by the end. 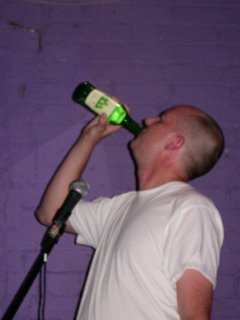 I'm pretty sure you could mokochukcha me under the table any old time ... when are you free?