Showing posts from October, 2005
Show All 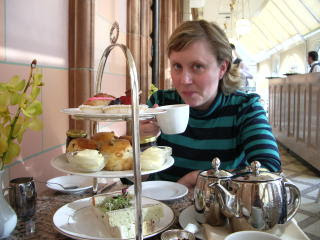 I'm now back in Seoul after a week in London. Highlights included seeing Sarah (of course), catching up with old friends including Kathleen and Mark and seeing fellow-poet Todd Swift. Oh, and I watched a bit of darts on the TV too. The task of putting photos up on this blog is so laborious that I'll just grace it with a few iconic snaps. For more details, see Sarah's blog - she's much better than me at this sort of thing. Must go: jetlag beckons. Sarah scoffs afternoon tea at Harrod's (Dodi and Diana shrine not pictured). Some bridge in London. Doctor Who's new residence. The London Eye (as seen in War of the Worlds). Umm ... Not happy, Jan.
Post a Comment
Read more

October 05, 2005
Hi to everyone in cyberland. I've been too busy to put anything up on here for a little while, as my energies have been directed towards getting my head around Seoul , trying to reign in the creative excesses of Clint Bo Dean , the world's worst-coiffured superstar and cataloguing the vast output of Davey Dreamnation's record company, DNRC . The Cordite Newsblog has also been revived, after months of wrangling with MYSQL database tables. Grrr. Nevertheless I have had some good news on the poetry front, with a poem accepted in The Age in August ( read it here ), another forthcoming in Famous Reporter in October (link soon) and a third in Overland, due out in December. I've also pretty much completed transcribing the poems from Abendland, all of which were written in Europe and America in July and August this year (scroll down this page for the full listing). Expect another fresh batch when I hit the road again in December. Until then, stay well and eat yer greens. Oh,
1 comment
Read more
More posts