Showing posts from November, 2005
Show All

November 30, 2005
"One of the thirty six or seven greatest writers alive today aged between thirty three and thirty four." "This book made me late for work again today." "I have read this book." "One of the six or seven must-reads that I have been forced to read this year." "Can you please buy some milk on your way home? Thanks." "Crying out for an editor. My number: 010-8288-1091. Regards, David." "I would very much like to kill the person who wrote this book." "No wonder you hide behind anonymity." "Is this your book? Oh. Sorry!" "Possibly the most gifted child in his kindergarten class. Only time will tell." "David is distracted too much by his peers." "You should loosen your belt." "I believe this to be the work of another author." "Everything that could be said has already been said, except this." "I dread the day this author learns to spell.
2 comments
Read more

November 29, 2005
usually a footnote explains the words or meanings in the poem - but in this case the opposite is true - see below *across the breeze/ birds fly/ foam in their beaks/ silver wings/ radar traces/ trans/ lateral/ trans/ am/ take me away/ silver bird/ foam in your beak/ across the breeze/ trans/ are/ we flying/ the friendly skies/ am/ trans/ am/ silver wings/ disappearer/ traces/ wingspan/ mighty clouds/ flying blind/ anvils/ am/ trans/ dam/ birds foam/ flies in their beaks/ are we trans/ or trams/ am/ erica/ n/ air/ line/ s/ am/ dc/ trans/ tran/ trans/ late/ nation/ trans/ lation/ s.
Post a Comment
Read more 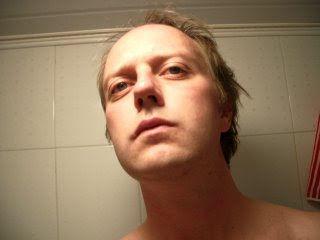 I got my haircut just before leaving Australia on July 1 and, until last week, hadn't had it cut since. Okay, so it's only been four months but as you can hopefully see from the image above it was developing nicely into a Steve Winwood style, with a touch of bogan at the back. Normally I keep it pretty short however and the major question was whether I would be able to stop myself from getting it cut before returning to Australia, presumably looking a little more like Tom Hanks in Castaway . I needn't have troubled myself worrying about it. Last Thursday night I got a call from an American friend named Sean, with whom I share quite a few musical tastes, and with whom I had some great conversations that night in the suitably-named Ho Bar in Hongdae, including one where we assigned 1970s bands to colours of the rainbow. Six shots of tequila, five beers and two gin and tonics later, I asked him whether he had a pair of clippers. Answering in the affirmative, he led me ba
13 comments
Read more

Personality Crisis ... Got It While It Was Hot

November 18, 2005
Well, like most blooooogers, I sometimes wonder whether anyone actually reads this stuff. While I have a site counter that gives me a lot of fascinating information, I'm noticing that most visitors to this site stay for one second or less, then leave. I'm sure a part of it is just people clicking the "next blog" button at the top of the page but I'm also sure there's more to it than that. Recently I've been visiting Ron Silliman's blog quite a bit and am envious of the way he manages to combine the poetic and the personal, without going overboard. He doesn't seem to post much of his own poetry on his site either. However, posting poetry here was one of the reasons I set up this blog in the first place. I just wonder whether anyone really cares? Even my PC Bangs blog , which I intended to be a travelogue/ diary type site, has degenerated into prose poetry, an altogether unexpected turn of events. I'm going to try and start posting more of my
5 comments
Read more

November 08, 2005
The year 1905 began on a Sunday. If you had been born In Korea you would already have been one year old then. Instead you chose Australia as your entry point into life, Just weeks before the founding of Sinn Fein in Ireland - Surely these things are connected. This is your century: The following year radio first burst onto the airwaves. A poem was recited and I wonder if upon your birthday Someone else was also inspired to sing a song, as you Lay in your crib in Bittern? Perhaps you don�t remember, Being only one year old, or two, at the time. Does the Batsman remember every run he makes to reach his Century? Perhaps he does. Your stamina astonishes Us all. You�ve outlived Bradman, seen off Deng Xiaoping. For you, the Great Depression was eighty years ago But nevertheless a real, tragic and desperate thing. Perhaps it�s nothing to you now. You�ve never driven A car which is, I�m sure, good. Now I remember the Blue Volkswagen in the garage of your Mildura house. Only recently have
Post a Comment
Read more
More posts