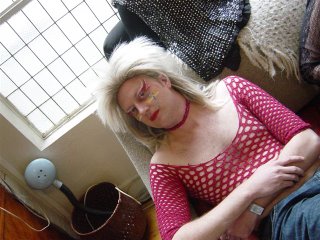 Well, he did it with the Mike Oldfield Five and now it's time for Davey aka Clint the 1980s Budgie Smuggler to strut his stuff once again. This pic was taken by STW (who else?) on the weekend during a video shoot for "Strike A Prose", a show being held as part of this year's Fringe Festival. Click here for more details. Oh, and by the way, I am dressed as I would have appeared in "Cats". Sniff.

SPINX MINX said…
u r too good to be true!
such a firm and fair complexion....puts us ladies to shame!

Sean M Whelan said…
Ah the hair, the mesh, the makeup and... the nipples. The true meaning of "Rosebud" as uttered in Citizen Kane is revealed at last. This picture is the true definition of rock and roll. Kids, take a long hard look and for christ's sake, learn something from it.
9/26/2004 02:09:00 pm

charlotte said…
The first time I saw Clint was in a run down Texas bar in '85. He was singing in glittered Speedos (little red diamante kittens on them) with an undersized fishnet top. I wasn't sure if it was the cheap booze, his rendition of Don Henley's 'All She Wants To Do Is Dance' or the nipple thing, but my heart was a flutter. You must remember this was the time of Dionne Warwick, we didn't think anything could get any more radical, and yet, through the pink smoke and the ten rented forty year old back up singers in cat suits, there he was: Clint Bo-Dean.
11/01/2004 12:34:00 pm