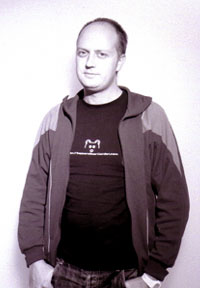 If you've ever wondered just what someone who's just spent twelve hours sitting in a series of overnight trains from Sapporo to Tokyo looks like, then look no further. As related in a previous post, in January this year I was interviewed by Keiji [O'Banjo] Minato for the purposes of an article in Subaru magazine, a literary monthly put out by Shueisha, one of Japan's largest manga and magazine publishers. The article, which is obviously in Japanese (don't even try to use Google or Babelfish to translate it, unless for some reason you'd like all of your stereotypes about cross-cultural misunderstanding to be validated), features two extraordinarily unflattering photos of me, and concerns Cordite and the place/space of e-zines in Australia. Having been present during the interview, I guess it doesn't really matter so much to me what's in it. I would be curious, however, to know what other Japanese writers and poets think of online publication. More importantly, I'd like to know what happened to the two hundred or so other photos taken for the article which do not appear online, including some quite embarrassing shots of me crossing my hands like a model. Even those would have been better than the albino shots they've actually used. I'm just relieved I shaved off my beard before the interview took place.